The town of Avoca in central Victoria, Australia was founded on gold. When the gold ran out  its economy relied on agriculture.  Many of the miners who rushed the area in the 1850s and early 1860s settled and took up land.  The big pastoral runs from before the rushes were broken up for closer settlement. When World War I began, the residents of Avoca were second or third generation Australians who nevertheless firmly saw themselves as British [because they were British!].

In 2001 I wrote a thesis for the University of New England entitled 'Avoca and the Great War', which examined the history of Avoca during World War 1. My research relied heavily on local newspapers. The two newspapers published in Avoca during the war were the Avoca Mail and the Avoca Free Press and Farmers' and Miners' Journal. These newspapers are now being digitised for the period 1914 to 1918 and published as part of the National Library of Australia's Trove digitised newspaper resource. As of today, the newspapers are part way through the digitisation process, waiting a final quality control check.

Other newspapers in the region including the Ballarat Courier and the Maryborough and Dunolly Advertiser also published news of Avoca and its residents .

This blog looks at Avoca one hundred years ago. Its source is newspaper reports of the time. Its topic is the soldiers from Avoca who enlisted and life on the home front.

On 19 August 1914 the Ballarat Courier reported that eight men had volunteered from Avoca. This group included Lieutenant Gus Ebeling and M. Rafferty both of whom had fought in the Boer War.  The Maryborough and Dunolly Advertiser had more details about the recruitment. 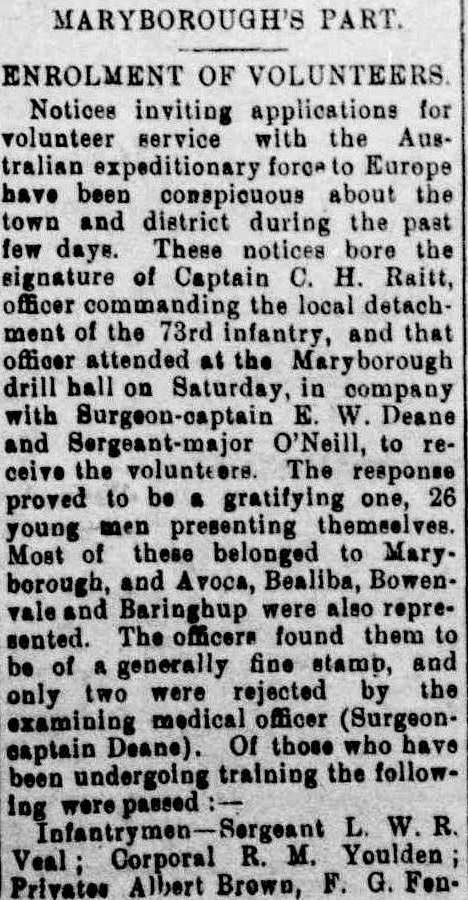 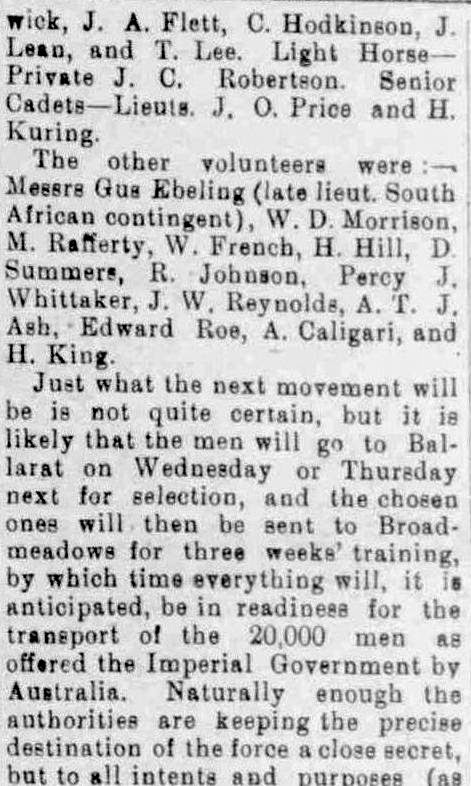 Others who enlisted from Avoca in August 1914 were